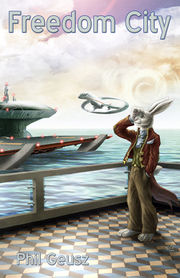 Freedom City is a furry novel by Phil Geusz. It was published by FurPlanet in February 2012, and is rated R for "some scary and/or violent scenes".[1]

Set roughly 100 years in the future, Freedom City takes place in a nation-state on a very large and complex artificial platform, constructed in international waters in the Caribbean.[2]

In a world that has developed bioengineering transmutation science, most of the citizens of Freedom City are happy to remain human, but the story's protagonist, Harvey Foote, has had himself transmuted into a "funny animal" rabbit. Foote is the manager of the Rabbit’s Foot Casino, the largest hotel/casino on Freedom City. His professional rival is Felix Morris, the cat-man manager of The Cat House casino.