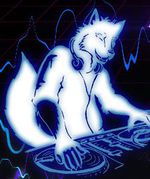 Frantic Eufuria (FE) was a dance event held several times a year in Bristol, U.K. It was organised by Jasper Foxx and featured such DJs as Spirit Raptor, Black Wolf, Swolf, Tryst, Graafen Blackpaw and Ravell.

Frantic Eufuria began in 2010 on the back of the success Jasper had with his original 'UKfur Rave'. The decision to change the name was taken in order to help the event appeal to more furs. The creation of a dedicated website created by Ravell helped to boost uptake as did flyers at various furry events.

Originally, the event was based purely around electronic dance, however following feedback at FE2, a decision was taken to run separate rock and metal events held on a separate dates. These events were re-combined following the move to the YHA for FE4, as the venue was capable of hosting both events simultaneously.

The event was originally held at the Cavern Club in Bristol, and followed a simple formula where a deposit was paid to the venue and if a set bar tab limit was reached, the deposit was refunded and then used for the next event. All events broke the bar tab.

On 15th May 2011, Jasper Foxx announced a new location had been negotiated for future events at the YHA site in Bristol. As well as providing a larger venue which could host both the electronic and metal events at the same time, a dedicated fursuit changing room, plus improved food and drink facilities, FE was now able to offer accommodation on-site.[1]

FE5 expanded Frantic Eufuria to include several daytime events, including a fursuit walk, gaming and a scavenger hunt over the weekend. Following feedback, the organisers decided that FE had moved away from the original concept of a furry dance event, and had almost become a mini convention - something which the organisers decided was not in keeping with what they originally envisioned. On April 10, 2012, Jasper Foxx announced that FE5 would be the last Frantic Eufuria at the YHA, a new location would be sought in a suitable nightclub/bar, and FE would return to its roots as a furry dance event, though they would try and bargain for discounted accommodation locally for furs wishing to stay overnight. In addition, due to poor attendance, the Rock/Metal sets would be discontinued.[2]

On 5th June 2012, Jasper announced that FE6 would be held on October 20, 2012 at the Warehouse Club in Bristol, providing two dance floors for different music styles. Accomodation would still be available at the YHA for those who wanted it.[3] Unfortunately, the Warehouse Club had its trading license revoked four days before the event was to take place, requiring a temporary return to the YHA (kept as a back-up venue) with a shortened DJ schedule.[4]

On 20th January 2013, it was announced that FE7 would be held on 20th April 2013. After attendee feedback from the previous event, and in order to build extra funds for a future change of venue, it was again held at the YHA. Registration opened at 8pm on 1st February 2013 and remained open until 8pm March 31st 2013.[5]

On 8th September 2013, Jasper announced that FE8 would be held on February 15th, 2014 at Club Tabu, in Weston-super-Mare. Accomodation would no longer be bookable via the FE website, and photo ID would be compulsory.[6]

In his post on 15th May 2011, Jasper announced that plans were underway to list Frantic Eufuria as a company, with himself as chairman, Ravell as vice-chairman, and Anthropuppy as treasurer[1]. The company was incorporated on July 28, 2011 in the United Kingdom as a private company limited by guarantee (company number 07720951).

On 27th April 2014, Jasper announced that, following a staff meeting on 25th April, there would be no more Frantic Eufuria.[9]