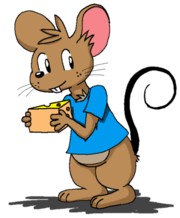 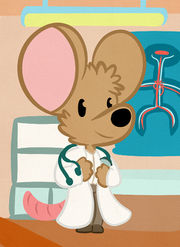 Chip Caramel discovered the furry fandom in 2003 after completing a series of comic strips and submitting them to his Geocities page.[1]. His most active presence online is via the MUCK, SpinDizzy. Chip is an active web developer, roleplayer, artist, video game developer, and musician.

In 2014, he switched his main character to Charles Cottonbottom, a male rabbit.

Chip's personal furry is a field mouse, modeled after one of the comic series' two protagonists, the other being a human. Age unspecified, he's portrayed as a young, brown, male rodent with a tan belly-patch. His tail is uncommonly colored black, due to burning he suffered during escape from a forest fire. Most notable are his large round ears which are often described as 'dinner plate' sized.

Chip's latest character is Charles Cottonbottm. He's described as a young rabbit boy with a vivid imagination. His imagination is so vivid in fact that it tends to get him into trouble; it clouds his sense of reality and when faced with adversity, he tends to imagine himself as something else, usually a stronger or more heroic being than he actually is, clouding his judgement.

In 2013, Chip took his Charles character to a new level by attempting to build a fursuit based on him. The suit has made an appearance[2] at Further Confusion before it was sold to the radio station K-Rock for Easter-related promotion [3][4]. Chip recycled the funds back into costume building, producing more fursuits.

Chip is a visual artist, specializing mostly in digital art, with the occasional contribution in traditional art. He started submitting images online via deviantART as user 'screechingsamick' and 'moveanimation' before settling on 'chipcaramel'. From here he moved to Fur Affinity as 'chipcaramel', spreading to Weasyl and other sites. Most active of all is his Weasyl presence.

Starting as an artist in 2002, Chip has developed a comic called 'Chen and Chip.' It was a story heavily themed on martial arts, magic, and teamwork. Being, for the most part, ad-lib, it had mixed reception but served as motivation to continue moving forward. After 12 issues, it was cancelled to make room for other artistic pursuits.

In 2014, Chip began making comics again. He created a 4 panel strip series called Charles, based around the rabbit Charles and his unusually active imagination. In this arc, he is able to imagine things happening around him, causing the events to actually take place. While defending himself against bullies at school, he finds companionship with his classmate Sammy, and the school librarian Luna.