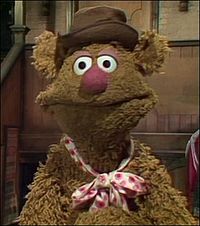 In the two pilot episodes of The Muppet Show Fozzie had a mechanism which allowed his cheeks to move. During the remainder of the first season, Fozzie was a bit more plump, and had ears that wiggled. Fozzie was named after puppet builder Faz Fazakas, who created the mechanism that allowed Fozzie to wiggle his ears. Fozzie was rebuilt for the second season of The Muppet Show; he was given a brighter orange hue, a tighter overall design, and a less "dopey" appearance. A special mechanism allowed his eyebrows to move, but the effect was barely noticeable, especially when he wore his hat. This eyebrow feature was removed when he was replaced with yet another puppet, just seven episodes into the second season.

During the early 1990s, Fozzie appeared less frequently, usually in supporting roles and often wearing a wig. On Muppets Tonight, Fozzie made quite a few appearances, but was less integral to the series, with most of his appearances being in sketch roles.

Fozzie became more of a major character again in Muppets From Space. He was part of the main cast, and he was the one who drove the Electric Mayhem Bus. He also got to work with Kermit again, reviving a pairing which had been absent for most of the decade.

Shortly afterwards, Fozzie would have a major role as The Cowardly Lion in The Muppets Wizard of Oz, and he got his own track, "North Pole Comedy Club", in A Green and Red Christmas.

Since the early days of The Muppet Show, Fozzie has often interacted with Kermit. Fozzie got Kermit to reluctantly assist him for one of his best-known monologues, "Good Grief! The Comedian's a Bear!", and has also had quite a bit of interaction with Kermit backstage. Most of the show's running gags were between Kermit and Fozzie.

Kermit and Fozzie have also frequently been paired together in countless movies, books, and specials. In The Muppet Movie, Fozzie was the first Muppet Kermit met on his journey. After Fozzie's unsuccessful comedy performance at the El Sleezo Cafe, Kermit invited Fozzie to come to Hollywood with him. The two friends sang the duet "Movin' Right Along" in the same film.