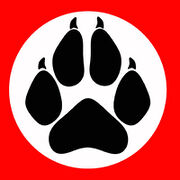 Association with Fascist imagery, Nazism, the Alt-Right, and the Furry Raiders[edit]

Foxler is a founder and CEO of the furry social political group, Furry Raiders,[5][6] headquartered in Colorado that initially began on Second Life.[5]

The group's logo, a black paw print in a white circle on a solid-color background that is default red,[7] created in 2010 by Foxler himself and often worn in real life by its members as an armband, or drawn on their OCs/fursonas/characters as part of their ensemble, has been criticized as resembling the iconic WWII German Nazi brassard.[8][9] The original design was based on the Furzi's late 2000s Second Life armband logo.

Foxler has also been criticized for tagging a Fur Affinity submission of his character's reference sheet as "Nazi" and "Furzi" and referring to himself as such,[2][10] performing a Nazi salute in fursuit for a photograph,[10] using a modified version of the Nazi Imperial War Flag with the swastika replaced with a paw and the Iron Cross replaced with a fox head design,[11] paying money to join a Neo-Nazi group,[12] stating that "he hates black people" and would rally for the Ku Klux Klan,[11] saying "I stand with Hitler",[11] and referring to himself as "Foxler the Hitler of Furry Fandom",[13][14][15] in addition to associating himself with the "alt right", a term popularized by white supremacist Richard B. Spencer.[16]

Though Foxler is of mixed-Thai ancestry, this behavior has been criticized as "aping the forms, fashions, conduct, and politics of the Nazis".[17]

In 2016, the Furry Raiders were asked not to wear their armbands to attend Foxtrot Club events, a fursuit-friendly dance night in a Denver club. Foxler chose to wear the armband to the club anyway, and allegedly assaulted somebody (or was assaulted on the way out) after being asked to leave, and so was permanently banned from all future Foxtrot events.[18]

In 2005, Foxler posted a LiveJournal entry admitting to knowingly engaging in cybersex with a 13-year-old girl when he was 18.[19]

In 2011, 24-year-old Foxler was accused of attempting to convince a 16-year-old girl to run away from her parents, plying her by sending her money and a puppy.[20][21]

Foxler has commented that "dressing up as a cute fox" allows him to "trap" people and get their guard down, "even children".[22]

Foxler has been accused of committing bestiality,[23] and has admitted to having sexual contact with a dog as a teenager.[24]

In addition to admitting to wanting to have sex with dogs,[25] he has claimed that his dogs are "sexual beings",[26] and has described French kissing a puppy.[27] He had an account on Beast Forum, since banned.[1] As recently as mid-2016 activity, his F-List profile listed Zoophilia as a "favorite" interest.[28]

On Febuary 23, 2019, Foxler stole Fur Affinity user Gearsypoodrox's fursona, and commissioned art with said character along with his in a sexualized manner.[31][32]

Foxler's interests include computers and technology.[2] As a member of the Porsche Club of America,[2] he also has an interest in cars.