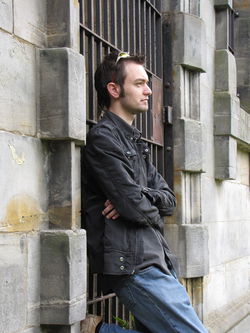 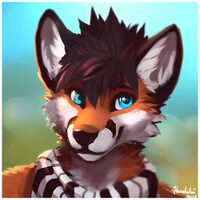 Fox Amoore also known as Amoore (born 26 August, 1984) is a Scottish full-time professional musician in the furry fandom. He currently[when?] serves as an administrator of Fur Affinity.

Though Fox Amoore focuses primarily on original modern classical works, he has also gained a reputation for his personal interpretations of soundtracks, popular music, and most commonly, video game music. His experimental pieces are also popular, ranging from ragtime to dance and techno.

Fox Amoore is constantly updating and upgrading his musical equipment and studio setup to provide the best sound possible. Some of his tools of the trade include a Roland Fantom X8 keyboard, a Yahama Tyros keyboard, Symphonic Orchestra Platinum and Symphonic Choir Virtual Instruments, and Cubase 5 recording software.

Fox's first professional album was 'The Spirit of the Wolf'. It was released under his real name Iain Armour in 2004. The artwork and presentation was done by Colin Hamilton.

"The Spirit of the Wolf" Song Listing:

The first album to be released under the Fox Amoore name, 'The Ballad of Midnight' was made available for pre-order on 16 November, 2007, with an official release date of 1 December, 2007. The album contains a mix of never before released originals, as well as fan favorites and popular commissions.

"The Ballad of Midnight" Song Listing:

In September 2012, 'The Ballad of Midnight' was re-released as 'The Ballad of Midnight, 5 Year Anniversary' containing 4 new tracks, including the fan favourite 'Immortality'. It also contained 4 updated original tracks, which were revamped with the experience Fox had gained in the interim 5 years. The original tracks were included as bonus tracks. The album artwork was drawn by TaniDaReal.

In July 2009, his much awaited second album was released on CD and also made available as a digital download. The album artwork was drawn by Vantid.

A third album, 'Fly', was released in April 2010 as a digital-download from Fox's bandcamp site. The album contains approximately 90 minutes of music, including such tracks as 'The Shore', 'Soaring Saber' and the title track 'Fly'. Also included upon purchasing the full album are exclusive tracks and bonus material. A promotional video from KE Films was released on YouTube to coincide with the album release featuring exclusive previews and a video explanation from Fox about some of the album. The album was well received, with cover artwork from Strype.

On September 8, 2013, Fox announced a fund-raising campaign on Indiegogo, raising funds to have his next album recorded at the world-renowned Abbey Road Studios. A funding level of £7,500 would cover the studio recording time, costs for guest musicians (including Colson Grainger) to be invited to the studio and perform on the album, to have stunning artwork by Alector Fencer featured and to have the CD produced at a professional level. Anything extra made would go towards the production of the album such as inviting even more musicians in, and if a funding level of £20,000 was reached, this would allow the opportunity for the studio time to be extended, and to get a full live orchestra into the studio.[1] The first target was met within two hours of the campaign launch.[2][3]

A video to accompany the campaign, produced by EZwolf and directed by Shay, was released when the campaign was launched.[4]

In late 2016, Fox unveiled details for his new studio album, which will be titled The Dreamcatcher. A campaign on Indiegogo was put on for the album from September 30-November 29, 2016 and raised over $31,000. Those who contributed to the campaign had a choice of getting the album as a digital download, CD (also signed if requested), or vinyl/LP, amongst other perks. The album has a slated release date of sometime in June 2017 for the Indiegogo campaign contributors, with public release sometime thereafter.

Similarly to Come Find Me, a video to accompany the new album was filmed by Ezwolf in California, USA in January 2016.[5]

In 2009, KE Films released a short documentary about Fox Amoore [[2]] entitled 'That's Amoore'. The teaser trailer [3] for 'That's Amoore' received three honours in the UK's Film & Animation category for the most favourited, most viewed and highest rated on the day of its release, whereas the documentary itself attained double-honour status. The documentary focuses on a tour of his then-studio set-up (updated since the production wrapped), a quick-fire multiple choice 'Scottish Inquisition', an interview and a partial music video on his piece 'The Shore'. Shot on location in three days in and around his home town, the documentary surpassed over 1,000 views within its first month of release. Fans lauded the production for revealing much about the composer, especially his origins.

Featured tracks in the documentary include an un-released 2009 work in progress version of 'Waltz of the Spirits', 'Wut' (an original Sims-esque strings cue for the documentary) and 'The Shore'. A DVD release, containing exclusive material including commentaries, production photos, extended sequences and a gag-reel is scheduled for a 2010 release along with a remastered documentary.

Fox Amoore began teaching himself how to play on his grandmother's piano at the age of five. In his school years he took proper lessons, and by the age of 14 was playing professionally at the Craws Nest Hotel in Anstruther, Scotland.

He is currently[when?] the entertainment director and resident cocktail pianist for the Queen's Hotel, Bridge of Allan, Scotland. In addition, he is also the keyboarist for the internationally touring Paul McCartney and the Wings tribute act, The Getback Band. In the past and currently he has composed music for television and video games, including the furry video game in production Anthem, created by Maus Merryjest. In addition he is a professional composer, session musician, and private tutor.

In 2009, his MySpace and YouTube accounts were hacked and wiped. However, they were relaunched and proved to work to his advantage, acquiring him more work in the wake of the attacks.

In the fandom, Fox Amoore has created a name for himself as the music administrator of Fur Affinity.

His fursona is a young anthro Red Fox, a user of magic known as Fox Krystoph Amoore. Not too much is known about the Fox's history, though it is known he was born in another dimension and came to be here due to a last-minute life-saving action by his dead mother and father, Blade and Cyra Amoore. It is also known that he has a brother, Cinard Amoore, who was adopted from a rabbit family which was unable to control his destructive magical powers. The two only met recently when Fox finally managed to discover a means to return to his birth dimension, to find his parents' grave; however, Cinard had already discovered how to return there. Reluctantly, Fox decided not to stay with his brother, considering his friends and mate, Wild Rose, back in this dimension.