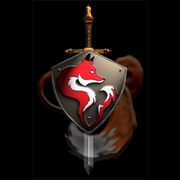 Fox Knight Comics is an American comic book publishing company. Affectionately known as "FKC", Fox Knight Comics are known for characters like Jogauni, Bruce & Chad, and Russel & Genevee. Recently they changed their name to cover more then just comics to Fox Knight Team. Most of the characters are fictional, and usually web-based at some point in time as well. The company was founded on August 20th of 2006 by Charles "Fox" Champion. Its headquarters is based in Southern California, with Fox being the editor-in-chief and main publisher. The industry it specializes in is comics.

Most of Fox Knight Team’s characters have only made appearances in non-tangible media form, such as webcomics and web galleries, such as DeviantArt, and Fur Affinity. However, there are some of them that have appeared in Publications through RabbitValley.

While the team at Fox Knight Team own the copyrights to several titles they publish, like Tribes Of Gerldama, Why Rick?!, "RubyLion", and Living Portions, other titles like Jogauni are only given permission by Luskwood LLC to be written and published on Fox Knight Comics website. Yet Beyond Eternal, on the other hand is owned by one individual, Mikhael Barreto.