This article is about the person. Fossil is also the name of a fursuit owned by Tiger Paw. 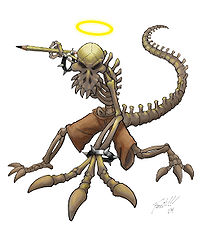 Fossil the Undead Anthrosaur Artist was born May 9th, 1979, in Macon, Georgia and lives in Huntsville, Alabama. He is a writer, illustrator, cartoonist, animator, tattoo artist, dancer, and otherwise typical dead dinosaur in the anthropomorphic fandom since late 2002, where his artwork was first seen on FurBid. He's perhaps best known for his herd of curvy female dinosaur characters, the Jurassic Beauties. Fossil is one-half of the anthro art-team "Bonk and Fossil", at one time an under-construction website of anthropomorphic artwork. The site was never fully launched, and only existed in different states of incompletion. Although Fossil is known primarily for his saurian art, he can draw anything else just as well. He also dabbles in sculpture, poetry, and music. He has been tattooing since 2003. 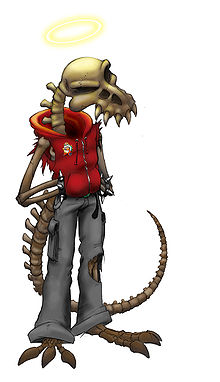 The fursona/avatar of Fossil is nothing more than a Tim Burton-esque skeleton; a jawboneless, 4 1/2-foot (1.38 m) tall collection of fossilized dinosaur bones of indiscernible origin and inexplicable animation, with morphy eyesockets and cheekbones for expression. Not even Fossil remembers what he once was, but he may have been a raptor.

In reality, Fossil has been attending several conventions since 2004, most of which are in the Southeast, but is not limited to that area. As time goes on, he'll able to attend more distant ones, such as EuroFurence, CaliFur, and RBW. He's been to conventions including Furry Weekend Atlanta, Further Confusion, Rocket City Fur Meet, Midwest FurFest, Mephit Fur Meet, I-Con, FA: United, FurFright, and Anthrocon. Fossil can also be seen online at Tapestries and Faibanx, or in Furnation Prime of Second Life.