Forests of the Night

From WikiFur, the furry encyclopedia.
Jump to: navigation, search
Culture > Publications > Novels > Forests of the Night 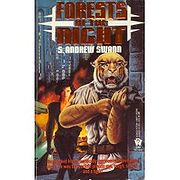 Front cover of Forests of the Night

Forests of the Night is the first novel of the Moreau series by S. Andrew Swann. It was published by DAW Books in 1993.

The story takes place in the year 2053 in a world where numerous races of animal-morphs, or moreaus, have been created in the preceding decades for menial purposes, or worse - for fighting wars, but have outlived their original purposes and are now viewed by many humans as a drain on society. Nohar Rajasthan, an 8-foot (2.44 m) tall tiger moreau, is working as a private investigator. At a moment when most things aren't going well for him, an unusual and unexpectedly well-paying client asks him to find out who killed the campaign manager of a congressman who is running for the Senate. All of his instincts are telling him this is a dangerous job, yet he has no choice but to take it. Sure enough, he soon finds himself targeted by multiple parties, and discovers the whole situation runs much deeper than it at first appears.

The original publication is now out of print, but the book is available, along with the second and third books of the series, as part of the Moreau Omnibus.