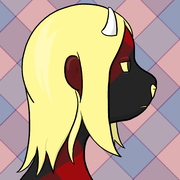 fluffy is an artist, musician, writer, and software engineer in lives in Seattle, Washington, USA.

fluffy discovered the fandom in 1995, and has been an active MUCKer since 1996; currently, fluffy is primarily active on SpinDizzy, and less so on FurryMUCK and Sociopolitical Ramifications, all with the name "fluffy."

fluffy's character (also named fluffy) is an agender/feminine, mostly-hairless, variably-colored (usually plaid) modified humanoid, which fluffy refers to as a "critter." fluffy prefers feminine or gender-neutral pronouns, although isn't particular to which ones are used.

fluffy prefers the name to be all-lowercase (or at least of a single case), citing aesthetics of the letterforms themselves, and also justifies it as not actually being a name but an adjective (referring to state of mind if not physical appearance, using the Japanese word ほっこり as a further "clarification").

Although fluffy almost begrudgingly identifies as furry, many of the comics contain furry elements, namely anthropomorphized animals, including real-life people who are portrayed as having various animal characteristics. fluffy finds it easier to remember and portray people in this way and has speculated that this may be due in part to having a form of prosopagnosia.