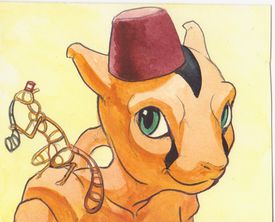 In real life, Jesse is a college graduate from the Ohio State University and a Chase employee who plays saxophone, knits, and wears a fez. She has worked as an editor for several fanzines, as well as for Smunchy Games. Her previous roommates include Crimson-wolf and Venbred. She currently lives with her girlfriend and two other roommates, all of whom are massive nerds but not furries.

Neubauje has served on the staff for AnthrOhio, organizing the Dealer's Den, Artist Alley, art programming track, and immersive attendee engagements from 2013 to 2016 and assisting with charity and theming since 2018. She organized the Dealer's Den for Fur Reality in 2016; since 2017 she assists with their registration department. She also helps out with the Con Store for IndyFurCon as of 2018.

From 2009-10, floppybelly Ninetales was a DJ on Second Life, performing at such clubs as Gay Yiffy Club, The Yiff Factory, and The International Yiff Center. Her music usually consisted of many genres, most notably classic rock.

Neubauje's fursona is an adaptation of Mewtwo, from Pokémon.