Fishy Tales of the Nekomata 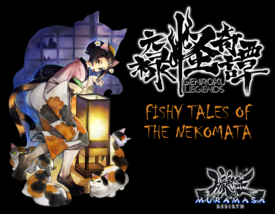 Fishy Tales of the Nekomata is an action RPG and the first of four stories collectively called The Genroku Legends, packaged as downloadable content for the video game, Muramasa: The Demon Blade.

Okoi and her bother were tasked with delivering a prized teacup to the Shogun. Unfortunately, both are killed by samurai hired by a rival. Okoi's pet cat, Miike who was following them witnessed the killings. She drank her owner's blood resulting in her assuming Okoi's appearance and gaining the powers of a nekomata. She killed the assassins and was able to complete the delivery honoring Okoi's last wish. Unfortunately, she learned too late, that Okoi's father took his own life after hearing of the murders.

In her quest for revenge, she turned to the tanuki Danzaburo to obtain greater power, but even after acquiring said power and killing those responsible, her anger was not sated. Her tails were eventually cut off during one of her rampages and her powers were lost as a result. She took up residence at a shrine as the priest's cat, Suzu while secretly hosting parties for the local cats in the area at the game's end.

Gameplay consists of side-scrolling beat-em-up with RPG elements. The player can switch between Miike and Okoi at any time during battle.

Outside of battle, the player takes control of a Miike in Okoi's form (who is visually represented as a nekomimi), although in her interactions with normal humans, by all appearances, she is human as well.