Findra with his original Amodeo fursuit 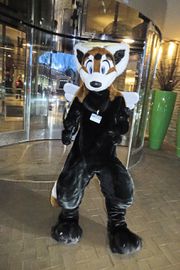 New version of Amodeo, with wings and a halo to indicate its memorial nature

Findra (real name Chris Sturtivant; born January 8, 1967, died October 9, 2011[1]), was a furry who found furry fandom in 1995, whilst a resident of Leicester, England. Moving to the USA, Findra became a MUCK wizard and server administrator for SpinDizzy, and Golden Realms MUCK (the latter in a non-executive role).

For 2009 Findra was Vice Chair, but on January 11th 2009 resigned from that position, as well as from the position of AAE's representative on the ALAA committee, citing differences with the Board of AAE on the Board's implementation of policy.

Findra was also a puppeteer, a founding member of PawPets West, and an administrator of the Plushie Mailing List from the late 1990s.

Findra typically took the form of a rabbit, although she was previously known as a dolphin (hence the name).

Findra also created Amodeo, a Red Panda fursona and fursuit. Years after its creation, the character and the original Amodeo fursuit were shared by both Findra and FoxMajik. Upon Findra's death, FoxMajik received the fursuit from its designer, MoreFurLess, for safe keeping and - after discussion with others close to Findra - to carry on the character.