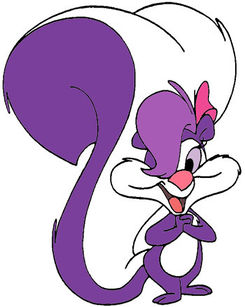 Fifi is a teenage female variation of the Looney Tunes character Pepé Le Pew and is constantly in the pursuit of a boyfriend, finally officially finding a willing one in Hamton J. Pig. Instead of the classic black-and-white look of a skunk, Fifi is purple and white, and wears a ribbon in her hair to have it fall over one eye. Fifi also made a cameo appearance in the Animaniacs episode "Survey Ladies" as the owner of a mall perfume store.

One of the most defining aspects of her character is that of her tail, which, along with being used as a pillow, is also often used to snag potential boyfriends.