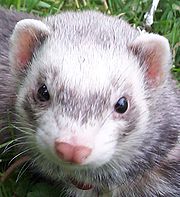 Ferrets are a species of mustelid. Technically, only members of the genus and species mustela putorius are 'true ferrets', but a number of loosely related species with similar physical forms and lifestyles (such as the endangered black-footed ferret) are known by that name.

They are known as slinky, active creatures, and have been domesticated for millennia, with the first known usage of domestic ferrets (to protect grain stores from rodents) dating back to 1500 BCE. As pets, ferrets are the third most common pet in the US (behind cats and dogs).

As carnivores, they need a diet high in fats and proteins and low in carbohydrates. A ferret's metabolism is also an exercise in extremes--the common domestic ferret (Mustela putorius furo) sleeps from 14 to 18 hours a day, and makes their owner's life a living hell (albeit a cute living hell) for the other 6 to 10 hours.

Some ferrets work at NASA, running cables through access spaces too small for a human to go through. A ferret's speed, relative strength, intelligence, and ability to be trained makes them ideally suited for this task. 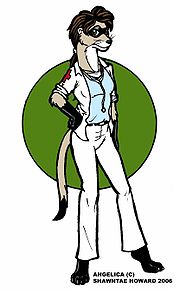 In the furry fandom, ferrets generally do not sleep from 14 to 18 hours a day, but otherwise resemble their animal counterparts. In many instances, the flexibility of their real-life counterparts is taken to extremes.

In Supermegatopia, Ferret Man is the setting's premiere antihero. In this, he represents the common American misconceptions that ferrets are vicious, and unsuitable around children; Ferret Man is violent, taking no prisoners and cleaning up the city by leaving even 'mild' criminals as a greasy smear on the street.