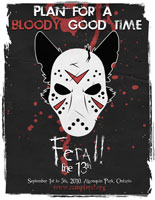 Feral! 2010 was a furry convention that took place over September 1-5, 2010, at Camp Arowhon in Algonquin Provincial Park, Ontario, Canada. The Guests of Honour were musician Colson Grainger, and artist Ivybeth. 94 people attended.[1]

The first ad for the 2010 event showed Pawnee, Feral's mascot, with a machete and hockey mask and read "A summer camp...by a lake...miles from the nearest town. Plan for a bloody good time."

A promotion within staff had Growler taking the position of Co-Chair, and artist and graphic designer Arius joining the team.