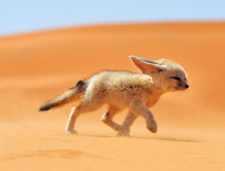 Fennec fox on a dessert setting 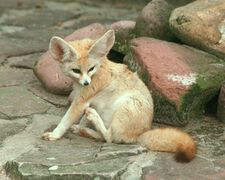 A fennec fox at a zoo 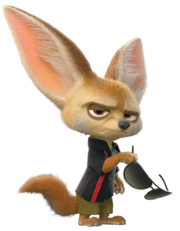 The fennec fox (Vulpes zerda, formerly Fennecus zerda) is a desert dwelling fox with a habitat ranging from the most western of Saharan Africa to the North Saudi Arabia, Jordan and Southern Israel.

These are the smallest in the vulpine family, measuring only 24 to 41 cm (head to body) but their large ears, measuring up to 15 cm, are relative to other foxes worldwide. Their coats are light earthen shades, fawn to golden in color, much like the desert sands they dwell in. Their facial features are diminutive and sharp. Much like their facial features, their teeth is also tiny compared to their body size, as they are opportunistic feeders and often forage for plants.

Fennec also hunt prey such as insects, rodents, reptiles, and eggs. Dehydration is usually a problem in deserts, but most residents have found out ways to go on without water for long periods of time, fennecs are not an exception.

Much like the jack rabbits of North American deserts, the large ears of the fennec radiate body heat to keep cool. The thick coat of the fennec looks like it'd be rather warm and indeed it is at night when the temperatures cool drastically, but the thick fur also protects them from the sun during the day. The pads of a fennec's feet are also covered in fur, acting as snowshoes for walking on loose sand, as well as keeping the pads from burning on the hot sand of the Saharan desert.

Fennecs live in burrows and are avid diggers. As social animals, they live in small groups of about ten others. They mark their territories with urine, like other canines. Fennecs competes aggressively for mates during their mating seasons, which occur around January and February. The gestation period lasts about 50-52 days with a litter of 2-5 kits. For the 4 weeks, the kits will be in the den, the male stays out, as the female is very aggressive when suckling kits. The kits go out on their own after 3 months to up to a year.

Because of their cuteness factor and their ability to be kept as pets, fennecs are a popular species in furry and are often confused with their more popular cousin the red fox, as well as kit foxes.