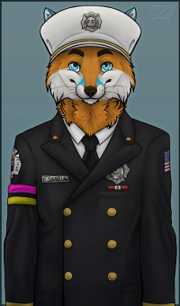 Art of Felix depicting him in his uniform drawn by ZtheCrazed, including a nod to Lemonade Coyote. 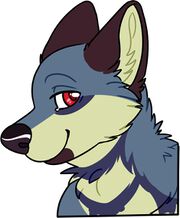 Felix has been active in the furry fandom since February 15, 2012. On February 7, 2019, Felix co-founded the Anthropomorphic Society of Old Dominion University (ASODU) alongside Yiri the Deer and Andromeda Wolf. He served as the organization's Vice President from 2019-2020.[2] In his free time, Felix can be found on the FurNet or Anthrochat IRC networks under the name TarinCoyote. He also regularly logs onto FurryMUCK using the same username.

Felix's fursona is a red fox with cyan ear tips, a cyan stripe running across his muzzle, and a cyan stripe on his tail separating the orange and white fur. Felix also owns a blue coyote character called Tarin, which he acquired when a friend of his of the same name left the fandom in 2018.