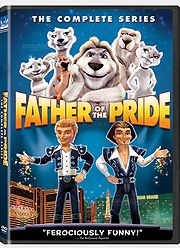 It premiered on August 31, 2004 on NBC and was part of a short-lived trend of CGI series in prime-time network television (after Game Over). It was cancelled after its first season.

On June 7, 2005, DreamWorks released the DVD box set of the entire series. The box set contains all 14 episodes, including 3 episodes that have not been aired before the DVD release, including the pilot (original and revised version), as well as commentaries and "The Lost Tale," an un-animated episode, presented with voice acting, sound, and storyboards. Out of the 3 unaired episodes (the Original Pilot, "Stage Fright," and "The Siegfried & Roy Fantasy Experience Movie"), all but the pilot aired after the DVD release.