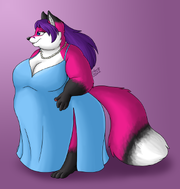 Dolby, an example of a plus sized fox.