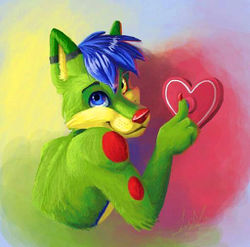 He joined the fandom on 10th June, 2016, and also joined Furry Amino. As of June 16, 2017, his profile has more than 3900 followers,[citation needed] and he was the fifth official member on the community to reach the Fuzzy Furry (Level 15) level.[citation needed]

His fursona is a bisexual male green fox named Faolan Pablo Wildpaw. Standing at 6'02", he works as a Devil in Hell, though in the past he was a veteran police officer, protecting the mighty city of Zootopia until he got too involved with an ungodly savage event that happened which caused him to willingly retire himself from his position. Faolan lives in England and is in a happy relationship with a North American black and wasabi green striped skunk called Ricky.

Faolan's natural fur colour is tropical green, to make him more noticeable from all of the other species of foxes. He has scruffy bright blue hair on the top of head, he likes to swipe it left and right continuously every day to make it look right.

Faolan has a dark green tongue and the same applies for the top of his ears. He also has two pairs of red reasonably, medium sized spots on his shoulders and upper arms.

Faolan has bright red claws to express his true emotions and feelings whenever he allows them to rip out. He also has a blue eye, with a yellow eye with red in the back, because the red colour is his werefox form being exposed through his left eye.

Faolan has a set of six red and dark green spots on each of his upper legs. It's a pattern that he has had since he was born in 1999. Finally, his tail is moderately long sized and has different tints and shades of yellow and blue on his tail fur.