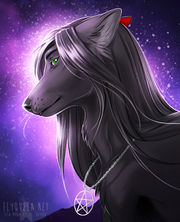 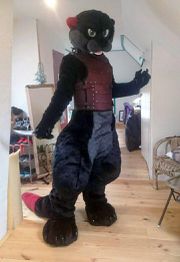 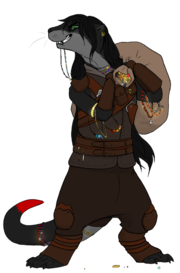 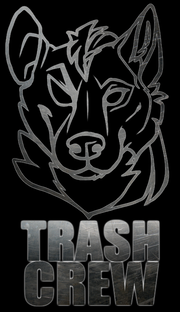 Faolan (born December 6, 1991) is a Dutch furry and fursuiter, who often portrays himself as a black wolf with long hair and relatively simple red markings, which consist of a red-tipped tail and a red right ear. Faolan is also the owner of Black Wolf Jewellery, an online shop dealing in hand-made gemstone jewelery.

Faolan was born in the Netherlands and entered the furry community when he was 14 after discovering FA, and became actively involved when he was 16 in the Dutch community.

He teaches English for a living, and spends his free time dancing, writing, and gaming.

Faolan dubbed himself as the Dutch Fandom's "Shaman" and deals with paranormal-related problems, and considers his spirituality a large part of himself and always loves discussing these topics.

After attending various events as a spotter or fursuit handler, Faolan decided it was time for him to take part in it. He received his fursuit in December 2012, and named it the same name, who was built by Faukx of Dutch Lion Costumes.[1] He often dresses himself either in a harem- or tribal- style. His fursuit has a removable wig. The suit retired after EF23.

Faolan 2 is currently a WIP (work in progress) by Dutch Lion Costumes.

In 2018, a new fursuit was created by WeMightBite Costumes, who is Faolan's otter character, Panriel, described as a thieving otter with a love for shiny objects.

In 2017, Faolan also took the 1st place in the non-suit division in EF's new dance event, Paws on Fire.

Faolan started a fursuitter dance group with FreesTyler called Trash Crew, which is currently only a duo. With the help of Wolvinny, they created music videos.[7][8]

Black Wolf Jewellery is Faolan's online web shop, dealing in gemstone jewelery, which he started in October 2013. He makes an item once, which is something he takes pride in, and also takes great care in selecting the stones to work with, as he pays attention to the aesthetics and effects of the stones. Additionally, he takes commissions.