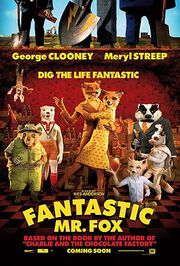 Fantastic Mr. Fox is a children's novel by the popular Norwegian-British author Roald Dahl. It tells the story of a father fox who outwits three human farmers and their guns in order to steal and provide food for his family, and for other woodland burrowers.

Development on the project began in 2004 as collaboration between Anderson and Henry Selick (who worked with Anderson on the 2004 film The Life Aquatic with Steve Zissou) under Revolution Studios. In 2006 Revolution folded, Selick left to direct Coraline, and work on the film moved to 20th Century Fox. Production began in London in 2007.