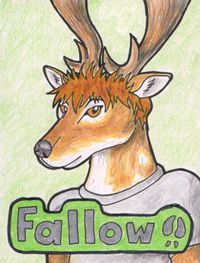 Fallowbuck (born August 30, 1989)[1] is a furry who lives in Crookham Village in Hampshire within the United Kingdom.[1]

He also goes by the shorthand name "Fallow" or is sometimes called "Bucky" by his friends.

His fursona is a male Fallow Deer with traditional spotted markings and palmate antlers, sporting a messy crop of strawberry-blond hair. He has plantigrade legs with hooved toes.

Fallowbuck first discovered the fandom around 2003, after finding some stories written by Jon Sleeper.

Often quiet and rarely commenting publicly, he is often reluctant to speak out, but can be talkative when the subject is one of personal interest.

Fallowbuck has an interest in engineering, particularly steam locomotion and stationary agricultural engines, but this also extends to fictional engineering, such as warp engines from Star Trek.

Fallowbuck's tastes in television and movies are mainly science fiction stories, including Doctor Who, Knight Rider, Star Trek, Back to the Future, and Star Wars.