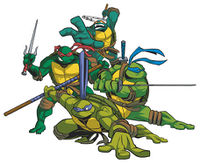 An exoskeleton is the external skeleton that supports and protects an animal's internal body and/or organs, in contrast to the internal skeleton (endoskeleton) of, for example, a human.

In popular usage, some of the larger kinds of exoskeletons are known as "shells" such as those seen on turtles. Examples of exoskeleton animals include insects, such as grasshoppers and cockroaches, and crustaceans, such as crabs and lobsters.

Characters popular with the furry fandom include the cast of Teenage Mutant Ninja Turtles (specially Mei Pieh Chi), Crush, a talking animal turtle from Finding Nemo, Sebastian the Crab from The Little Mermaid, Flik and the rest of the shelled insect characters on Pixar's A Bug's Life, Z and the rest on the colony on DreamWorks's Antz, Digimon, Pokémon, and Verne from Over the Hedge, among others.