Excelsior The Lion aka Randolph D. Garrett is a fursuiter who discovered the culture in April 2010. He lives in Antioch, CA but grew up in Santa Rosa, CA. He has a degree from Heald College in Accounting where I fell in love with computer programming..


He has a severe hearing impairment but is not ASL fluent (as yet). He is a grey muzzle by age (51 as of 2011) and not by the amount of time he had been involved in furries.


Like many San Francisco Bay Area furs he was a computer enthusiast as well as having an interest in science fiction.

He had at age 20 (1980) had a fursona that he dreamed up on what Carl Jung called "active imagination". He called him LionMan and drew strength and courage from him. Then in April 2010 hr was browsing YouTube looking at masks and came across NorthFur's head video with moving mouth. He was blown away and looked into the company where he ran into the word fursuit. 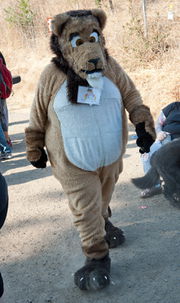 This is my primary character and my primary full fursuit currently undergoing a new build but lacking the new head as of this writing. Generally standard lion colors with a dark mane to indicate my age. FA page: http://www.furaffinity.net/user/excelsior-the-lion/ 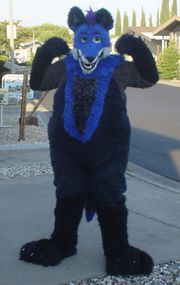 I had bought a new fursuit head from a fried (still in the mail as of this writing) which is a generalized fox design. The fursuit is mainly blue in color and was formerly created as a full fursuit but now is a partial as the body was disassembled. As part of the fursona I have this character a member of Star Trek's United Federation of Planets hence "Federation" in the name.

Created to learn making a rabbit type fursuit as well as an attempt at a 'professional' construction.

A melanistic (black) jaguar fursuit I created. Don't call me 'Panther' as that is NOT a species!

A brown / blue coyote like fursuit I created. It is a full fursuit made to replace Federation Fox. I am a member of the United Federation of Planets but am NOT a member of Starfleet and am only a captain of a freighter (name pending, id: F127).