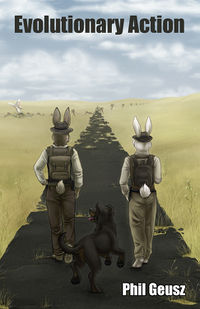 Evolutionary Action is a novel by Phil Geusz. It was published by FurPlanet in September, 2013, being released at RainFurrest 2013.[1] The novel has an R rating for "some scary and/or violent scenes".[1]

Evolutionary Action explores what happens when a college campus full of academically-oriented, genetically-engineered anthro-rabbits, hard-wired to be non-violent, find themselves living through and beyond Armageddon.[1]

As the danger edges closer and closer, and the rabbits' pacifist mental programming offers no flexibility, Dr. Rusty Harrison is called in. This madrabbit is the university's leading authority on human conflict-resolution behavior, which, unfortunately for his social standing, encompasses the arts of lying, gunfighting, spying, booby-trapping, and infiltration.