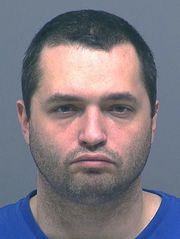 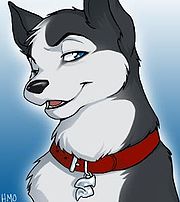 Evil Sibe is a member of the furry community who has participated in various furry newsgroups, image boards, social media sites, and multiplayer online role-playing games.

He is a the owner and moderator of the furry subreddit /r/yiff,[1] plus a mod on the related subreddits Yiff Comics and Hard Blush Site Rips. He was a moderator on Lulz.net.[citation needed] Evil Sibe likes to attend furry conventions, although he has been banned from a number of them.

Evil Sibe's chosen avatar is a Siberian Husky, the dog breed from which he derived his original handle ("Sibe").

(*) He was present at Conifur Northwest 2004 with the approval of the convention committee.[2]
(**) Panelist 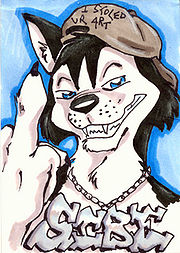 Evil Sibe gained widespread infamy[3][4] in the furry fandom due to his uncivil demeanor towards other fandom members,[5] and his illegal distribution of the copyrighted works of furry artists through the early 2000s.[6]

Although banned from several furry conventions, this has not prevented him from trying to continue to attend them, and allegedly, "Cause more problems". 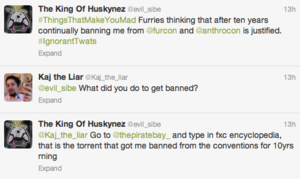 The FXC Encyclopedia, The Pirate Bay, and Evil Sibe

In the post, he suggested[citation needed] that Rabco Publishing was behind this development, takes some jabs at Nexxus, and ends it by professing his love for his family and thanking his friends for being there for him. The reactions of his friends are mixed, with a few[who?] believing the post is a prank, to those[who?] who believed it to be factual, wondering what they can do to help.

It's these last reactions that forces Evil Sibe to admit that the whole thing was "a gag and Im allright.[sic]" Again, reaction to this admission is mixed: from the "I knew it, Lol!," to the "How dare you deceive your friends that care for you!." For the last ones, Evil Sibe had a simple response: