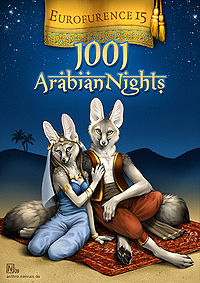 Eurofurence 15, "1001 Arabian Nights"[1], was a European furry convention that was held from the 26th to the 30th of August 2009. It was held in the Ringberg Resort Hotel at Suhl, Thuringia, Germany for the third and final year, following Eurofurence 13 and 14.[2]

911 con-goers are reported to have attended, according to the Daily Eurofurence newspaper that had his introduction on this very con. [3] As well as the first year to introduce a new 'department' called con-ops to take care of various important tasks at the con site.

The Guest of Honor for Eurofurence 15 was Jimmy Chin.[4]

Like previous years, the musical guest was Alexander James Adams with a 90 minute solo performance on Saturday afternoon. He also played at the Furry Music Café.

The Freies Wort Suhl published a short report about Eurofurence on Wednesday and a longer one on Saturday.[5]

This Eurofurence was the first with their own in-con media coverage: The Daily Eurofurence.

Like in the years before, Eurofurence 15 raised money for charity uses yet again. The money raised from Eurofurence 15 - €2938.53 (~US$4225)[6] - went to Wild Animal Park in Suhl to support the protection of Lynx as biggest European wild cat.[7]