Ethan Staghorn (born 1980) is a furry fan from northern Europe. His personal species is a white-tailed deer, but he does not have a fully developed fursona. Instead, he tends to use his fursuit character to represent himself in the fandom. He typically uses the screen name staghorne on the web. 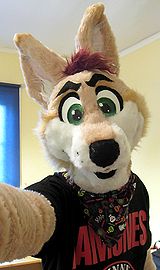 Ethan's fursuit Jake Greystripe
Ethan discovered the furry fandom in May 2000, although his interest in animals and anthropomorphism had developed several years earlier. Initially, he was mainly attracted by the art, and spent a lot of time browsing Yerf and the Lion King Fan-Art Archive.

Beginning in 2002, Ethan's furry interests gradually broadened to include the social and community aspects of the fandom, such as reading furry web forums and blogs on LiveJournal, and—later—also fursuits. In February 2009 he acquired his fursuit, a black-backed jackal costume named Jake Greystripe and built by Kilcodo Costumes. In contrast to the meek deer that is Ethan's personal character, Jake has an edgier "playful punk" attitude.

Being an archetypal Internet lurker, it was not until 2007 that Ethan got personally involved in the fandom. He first met furries in person at a vfur furmeet in Vancouver, British Columbia, and saw fursuiters for the first time at Burning Man later the same year. His first furry convention was Anthrocon 2009, which also was the first convention he fursuited at. He made his public fursuiting début in Surrey, British Columbia, in August two months later.

Ethan is a founding member of NordicFuzzCon, where he currently leads the feedback department.

In real life, Ethan works as a researcher in computer science. He has a PhD in electrical engineering and an MSc in Engineering physics.

Ethan has an extensive range of interests, but few outright hobbies besides the furry fandom. Many of his interests lean towards science and technology, and he spends a large fraction of his time browsing the Internet. His off-line pursuits include singing, especially karaoke, and crafting puns.