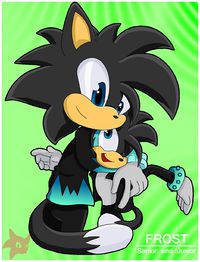 Being an avid role-play from the age of 9 was the beginning. He lived in Trenton and Kingston for numerous years back and forth until moving to Cold Lake in northern Alberta. Glacier was in "Hastings and Prince Edward Chorus" for a few years followed by a career as a DJ producing a variety of EDM music.

His furry life was motivated by ex-girlfriend Samantha Peterson, with the obsession of Sonic The Hedgehog. Later portraying himself confusingly between the three hedgehogs, Silver, Shadow and Sonic. Eventually he fell for the design of Frostcat's mobian form and after going to a great extent to learn about him. Eventually adapting a design of his own after a confession about using Frostcat. He finds himself very lost in the fur world after after discovering his lack of close fur friends having Frost Cat, Blazger. Frostcat Jr. often referred to as "Frost" by friends is however comfortable with his furness even with his difficulties with adults in his life.

The basic feline temptations will get the better of him at times. He passionately enjoys techno music as well as various video games (Zelda, Sonic, Minecraft etc.) and composing techno/house music under an unknown genre. His work recently has been a collaborative mess of many different pieces of songs to create mixes. He is also showing another cat based trait having a powerful detest of water. It's also rumored he will be returning to northern Alberta.

He has attended no anthro based conventions at this time but he has been to few others.