Eric Boot (born November 20th 1991) is a furry artist/cartoonist. He lives in a town situated in Hertfordshire, England and has Asperger Syndrome, a mild form of autism. He first joined the furry fandom in November 2005 (ahead of his 14th birthday) when he joined deviantART under the username, "imnotinsane".

He also has accounts on SheezyArt and Fur Affinity, both under the name of "RevengeBoot" (despite the fact that he left SheezyArt for good in the Spring of 2006). 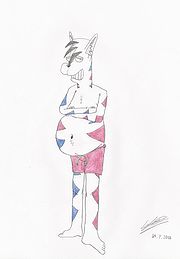 Jace (in his previous form), posing with only his swimming trunks on. "Summer Jace", July 2006.

His main fursona is named Jace and now has two forms. His original form is an anthropomorphic character whose species still remains unknown, even to Eric himself. He pointed out once on deviantART that he made up his fursona very randomly, hence the reason why his species was so mysterious. Often he's said to be a sort of feline/big cat character (kind of like a cross between a tiger and another animal related) but Jace's original species is still mysterious, despite Eric himself proclaiming him to be a bit of a feline/big cat character after all.

His original form is often recognizable by his red and blue stripes and his orange "Joe Bloggs" t-shirt (which is a shirt that Eric usually wears in real life). He doesn't have a tail though, Eric once said that he was trying to draw a tail on him but it "didn't really look right" so he left the tail off.

As of January 2007, Eric decided to change the species of his fursona to a bear after being inspired by a chat on MSN with one of his friends that he met through countless furry group conversations. A picture of the Jace's new bear form will be shown on DeviantArt and FurAffinity in the very near future but Eric is still trying to decide whether this change will last. 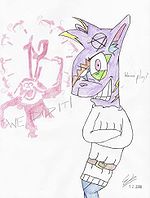 The first (and so far, only) pic featuring Crazy Jace, February 2006.

Eric has another fursona. His name is "Crazy Jace". The inspiration for the character came from how mentally confused and "crazy" he became from all the abuse received from bullies at a secondary school for children with special needs he used to go to before he switched to home schooling, as well as from flamers and spammers on the Internet. He was introduced onto deviantART in February 3, 2006, and onto FurAffinity on February 7, 2006. More pictures of him haven't been shown on the internet ever since the first picture featuring him has been uploaded.

Eric announced on deviantART in October 3rd, 2006 that his other character, Crazy Jace, will make a return. He has announced that Crazy Jace will be the main character of a full-length comic book series. He said that "Crazy Jace won't be himself in the comic strip, he'll look more-or-less exactly the same as always but his name and what he'll be like will be different. It's only for this long, long comic series though, just think of it like a movie and Crazy Jace is starring in the main role as a different person (kinda like movie stars starring in Hollywood movies). I hope everybody understands this." Unfortunately, due to several complications with creating such an ambitious project, the project has now on infinite hiatus or completely cancelled.

Replacing this project is a simple webcomic, to be updated every 2-3 weeks, entitled According to Maxwell. The comic follows the life of the title character, a teenage raccoon furry character who lives with his natural feminist mother and her new fat, dim-witted wolf husband in a not-so-ordinary life in a surreal society where humans and "furries" co-exist with virtually anything being possible. The comic is scheduled to be launched on January 13th 2008 on the official website, with merchandise already being sold through CafePress in a shop managed by Eric himself, along with all the merchandise being sold and to be sold. The comic was originally planned to be launched on September 16th 2007 but to severe unpredicted problems with Eric's computer that forced him offline for less than a couple of weeks in September 2007, missing the deadline completely in the process, the launch date has been moved even further to January 2008.

Unfortunately, he is one of the main targets of a spammer on deviantART and it made Eric so hurt, he deleted all his works off of that account and then made an all-new, more successful account in secret (by the name of "RevengeZero"). He switched accounts in November 21st 2005 (right after his 14th birthday)

In June 2007, Eric created an account on Blogger purely to showcase his art portfolio. Even if there have been quite few updates since the account was set up, the blog has already gained some positive feedback. Particularly from animator Jay D. Smith who currently works with Irish cartoon studio Cartoon Saloon on the flash-animated TV show "Skunk Fu", which Eric featured by having the production blog in the links section.