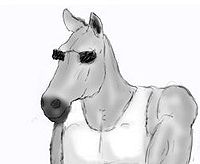 Equino Faulkland is a furry artist and anthropomorphic horse who lives in Kentucky.

Equino got his start in the furry MUCK Tapestries. There, he became a bouncer at the local stables located on the MUCK. He also begun his art trade there, mostly favoring non-anthro art work. Most of his newer works can be found on his VCL page.

He migrated over to Second Life in the fall of 2005. There, he founded his own SL business called Equino's Armory, where he produces and sells in-game working replicas of military vehicles.

Shortly after starting his business, he started becoming more involved with FurNation, becoming a regular in the sandboxes between Prime and Alpha, and then later Vista and Omega. Eventually, he rose up the ranks to become an administrator for FurNation.

Equino acquired the Ryder Manor sim from Swythe Armistice in February, 2007, and with it created the Ryder sim cluster. It currently holds 10 sims, three owned by Equino, long term friend Shadowspawn, and Paskis. They hope to see the project to continue to grow.

Equino is good college buddies with Panda. Both study Electrical and Computer Engineering.