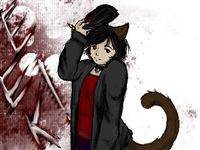 Enya Dyre is a female furry/anime artist and fursuiter who resides in a suburb of Cleveland, Ohio, U.S.A.

Originally, Enya's fursona was a panther named Nina; a dark grey panther with long black hair, and red markings. Then she was Koko, a timber wolf with a burn over her eye, and short black hair. Then her fursona became a wolf/panther (leopard) hybrid. Her head has a wolf-like structure, with red-rimmed, pierced ears, and the bridge of her muzzle is red. She also has red under-eye markings, and cerulean blue eyes. She has dark grey/black fur, with leopard spots on her shoulders and legs, a white underbelly, and red-tipped paws and red paw-pads. Her tail is very long, and cat-like, with spots going down its length into the red tip.

Enya has always seen her family as animals. Her mother's side are like a pack of wolves: family-oriented, very organized, powerful, and sociable. Her father's, on the other hand, are more like the lone big cats, such as leopards or panthers. Enya has traits from both.

Enya has been in the fandom since Takoda Wolf showed her videos of Kijani, fursuiting around town. Although she was not that much into it at first, something clicked a couple of years later as she visited her old furry accounts, after stepping away for almost two years. She has always had some form of connection with animals, and wanted to be one ever since she was young. She owned full-body leopard-print pajamas with an added cat tail.

Enya has been drawing anime since Middle School, but, within what would have been her second year of college, she started to draw furry art. She takes commissions on her FurNation account.