Emperors of the Twilight

From WikiFur, the furry encyclopedia.
Jump to: navigation, search
Culture > Publications > Novels > Emperors of the Twilight 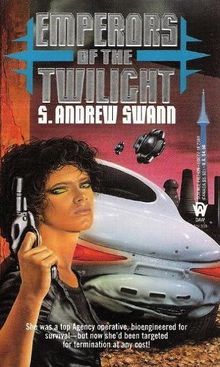 Emperors of the Twilight is a 1994 science fiction novel, the second book in the Moreau series by S. Andrew Swann (also known as Steven Swiniarski), published by DAW Books.

Set in 2059, six years after Forests of the Night, the first book in the series, Emperors stars Evi Isham, a "frank" (genetically engineered human, short for "Frankenstein") who was introduced in the first book.

An NSA agent, she is suddenly targeted by a group of Moreau (animal-human hybrids) assassins, and tries to make contact with their Agency, only to find out she is thought dead and a traitor. Nohar Rajastahn, introduced in the first book, makes an appearance.