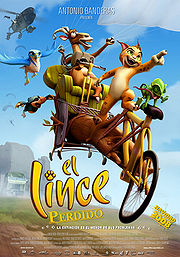 A promotional poster of the film

It received very positive criticism, having even being called "the best animated Spanish film ever made".[citation needed]

The film tells the story of Félix, an unlucky lynx. After he once again ends up at the national park's animal recovery center a mercenary starts chasing and capturing Félix and the other animals. Amidst various mishaps and unfortunate blunders Félix and a small group of his friends set out to free their captured buddies.