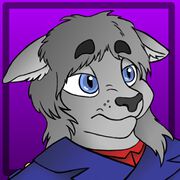 Ego Nightfall in the present day

Ego Nightfall is a furry fan who lives in Wisconsin, USA.

Ego's human counterpart is unsure of exactly where he first heard the word "furry" used in the relevant context, although the character Ego Nightfall was first designed in late 2015, and he has considered himself a furry since at least early High School.

Ego Nightfall, is a silver cat, born in the year 1050 CE just outside of what is now London, England. After being killed by a Norman knight in the year 1066 fighting for the Anglo-Saxon army during the Battle of Hastings, he stood back up, unharmed. He found that death was not permanent for him. Throughout the centuries that followed, Ego's adventures were uncounted. He watched empires rise and fall, fought in countless wars and lived and died more times than he can even begin to remember.

by the late 21st century, Ego had settled on the planet Mars, where he would stay for many hundreds of years, visiting Earth just a few times. He worked for a long time as a terraforming engineer for the Red Planet, and stayed long after he the Martian population had discarded their pressure suits and lived on Mars as freely as any on Earth. Eventually, with the discovery of faster than light technology in the year 3410 CE, Ego Nightfall departed to live among the stars. His fate since departing the Sol System remains unknown.

Ego's human counterpart enjoys outdoor activities, carpentry and has something of an interest in firearms and their history.