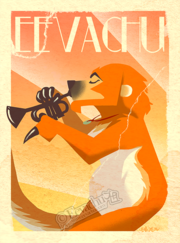 Eevachu (born February 20, 1992), is an artist and fursuiter from Toronto, Ontario, Canada.

Eevachu has a Bachelor of Arts in Animation[1] from Sheridan College.[2] She has worked as a freelance artist since 2006.[3]

She has attended over 50 conventions, many of which in the dealer's den.[7]

Eevachu's fursona is a shapeshifter, but is most commonly presented as a golden lion tamarin/polar bear hybrid.

Eevachu won her fursuit at the Condition: Red fursuit raffle.[8] The fursuit itself was made by Frostscar.[9]