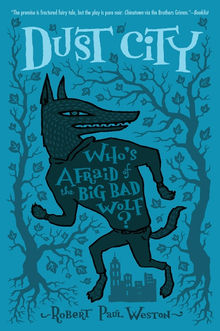 Dust City is a novel by Robert Paul Weston, published in October of 2010. The plot focuses on Henry Whelp, a sixteen-year-old anthropomorphic wolf and the son of the now-imprisoned wolf that murdered Little Red Riding Hood and her grandmother in his quest to discover who is truly to blame for his father's crime, and the truth about the fairy dust sold both in pharmacies and the Black Market.

Among other fairy tale creatures, Dust City contains many anthropomorphic animals known as animalia such as wolves, foxes, ravens, hedgehogs, mules, and pigs, whereas creatures such as Elves, Goblins (referred to as globs), and water nixies are hominids. Of the animalia, wolves, foxes, and ravens are considered the least trustworthy, and are often not served at restaurants.