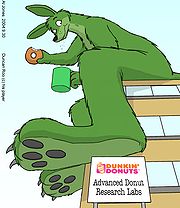 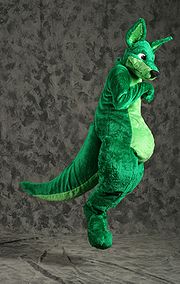 Duncan Roo (born September 30) is a macro green Kangaroo character on FurryMUCK. Duncan stands at approximately 100 feet in height. He has been drawn by a number of artists, among them Inuyasha, Ken Sample, and Tommi Cat.

Duncan is an administrator for the Macrophile.com forums. He has hosted a number of themed art contests, providing prizes for the participants. The contests are part of an effort to get the macro community more involved, and they produce a number of well received pieces of art.

Duncan Roo has been a character in the fandom since 1997. He is located in California, U.S.A.

Duncan now owns a fursuit of his character made by his close friend Oz Kangaroo. He has attended conventions, bowling nights and other furry themed events in suit and is quite the performer.

Duncan Roo is a playable character in the "Kaiju Combat" series of games, developed and published by Sunstone Games.[1] His role in the game is as a "joke character" aloft with Macroceli, another furry (or scalie) character. His main abilities in the game consist of kick and punch attacks, as well as found special items themed after Looney Tunes-era cartoons.