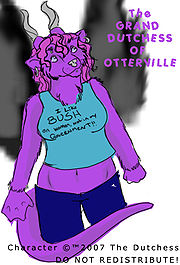 Image of the Duchess used on the first deleted article. Art by banrai

Duchess (complete name: The Grand Duchess or The Duchess of Otter Kind) is an female otter character created in Januray 2007 by Anjel Kitty, Banrai, Soundhound, and several of their friends.

In late December 2006/January 2007 a group of friends concocted the Duchess as a satirical jab at Duke Otterland due to some of his actions online. A false Wikifur article about her and her fursona were created, including the creation of a user page for its human counterpart (User:Duchess.)

While no actual purpose was intended other than to create controversy, the introduction of the fake article resulted on the deletion of the Duchess article after Wikifur admins were made aware of the fact.

Beyond the controversy (a new beginning)[edit] 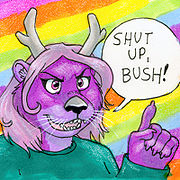 Duchess, as drawn by Growly

The character article was allowed back on Wikifur after contentions by its creators that the character was know being used in a positive and constructive light.

It has since found use as a tool to raise women's rights awareness in the fandom, as well as use as a mascot for Furry Zine, one of Anjel Kitty's upcoming zines.

The primary thing that Duchess stands for is women's rights. She has a LiveJournal where she will often post about controversial news stories and other world issues that affect women. 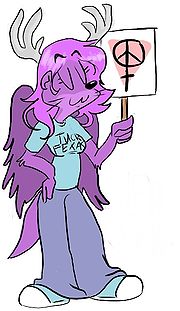 The fictional character created to be Duchess' human counterpart was named Jessika (pronounced 'YEH-si-ca'). She is suppose to be 25 years old, having been born on January 1, 1982. She works at a local center for women, helping women who have been in abusive relationships get the legal and mental help they need.

She loves animals and plants, and all things natural. She hates factories and pollution, and lives for the day that humans go back to nature instead of destroying it.

Duchess is a violet otter with rose-colored hair who stands at roughly 5'10". She has baby-blue eyes. She sports a pair of twisted horns as well as large bat-styled wings. She is usually seen wearing suggestive or outspoken shirts that reflect her views on women's rights. Duchess is bisexual, leaning toward lesbianism.

Duchess is from New York City, and often attends protests all throughout the city. She has somewhat radical political views, compared to most, and is never afraid to get into a discussion about what she believes.

She has been viewed as an anarchist, a Femnazi, and an Eco-terrorist. She is extremely anti-George W. Bush, and detests anything to do with him.

In Duchess' "own words":