Duamutef, or abbreviated Dua, is a German furry who currently lives in Berlin.

The name Duamutef is only one of many possible interpretations. Originally the name comes from the ancient Egypts and is only known to us in its written form in hieroglyphs. Other interpretations are Tuamutef and Tuamautef. 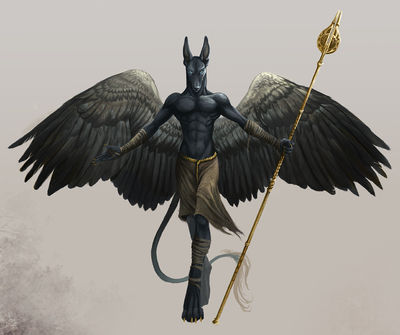 Duamutef was inspired by the Anubis: Dark Desire comics, especially by the comic strips by Sara Palmer.

Duamutef is a slim black jackal with big crow wings on his back. His ears are, like it is typical for jackals, long and pointy. The insides show a rib structure and are covered with soft fur in the color of Baileys cream. This tuft is very sensitive. His headfur as well as the rest of his fur is short and smooth.
His eyes are surrounded by white Udjat-eye paintings, also known as Horus-eyes. The eyes themselves are iceblue and reflect his inner calmness.
Duamutef usually doesn't wear any tops. He has no visible nipples since those are fully covered by his fur. On his hands that have the basic structure of human hands, except that the insides have a pad-like structure, he has long narrow claws whose color and surface is similar to polished gold.
His scribe's kilt that is made of slightly yellowed linen reaches a little bit below his knees when he stands straight.
His tail is slender and covered with short fur, except for the brush-like tip. When he lets his tail hang the tip reaches down to a handwidth above the ground.
Duamutef walks digitgrade and has for toes that have golden claws just like his hands.

Duamutef almost always carries his golden spear with himself. The spear is as long as Duamutef is high, measured from toe to ear tip. The shaft is covered with ornaments except for the four hands broad grip area at the middle of the shaft. The spearhead consits of two blades in the shape of teardrops that are slitted along the spear axis, which gives the spear four pointy tips. Between the both blades is a similar shaped white opal. Since the blades overlap the opal it can only be seen when one looks from a steep angle between the blades. The other end of the spear shaft forms a simple pointy tip.
Around his ancles and wrists he wears losely bound mummy bandages aus lightly yellowed linen, similar to that of his kilt. Those bandages are blessed by his protection goddess Neith and protect him against all kinds of mischief.
Jewelery like golden ear rings, bracers, tail rings and broad Egyptian collars he wears on occassion depending on his mood, but they aren't compulsory. His prefered gem is lapislazuli.

Duamutef can control all kinds of minerals and metals. He moves and shapes them using his pure will.
The feathers of his wings can become harder than steel and sharp like razors. This change is recognizable by the increased straightness and slickness of his feathers. In addition they get a metallic blue gloss. When the feathers move in this state they make gentle chime sounds.
Duamutef's claws are harder and sharper than diamonds, yet he only uses them for carving and engraving.

Behind this name stays the Egyptian god Duamutef, who has the same appearance like Anubis, but is in fact a complete different deity.
In addition Duamutef shares many attributes with the Archangel Uriel which is one reason why he has wings. Another reason is his admiration for crows who are like jackals known as guides for the souls of deceased.