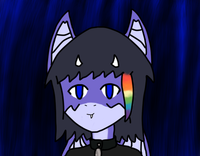 Nico "Drawolf" Steenvoorden (born February 9, 1995) is a artist who lives in Baarle-Nassau, Netherlands. His drawing style is mostly inspired by anime and other furry artists, and he is mostly interested in canine and dragon characters. He is mostly active on deviantART, but sometimes posts his art on Fur Affinity.

Nico's fursona is a blue-colored wolf-dragon hybrid. He has dark blue/gray hair with one rainbow-colored lock. His personality is on the feminine side. He usually wears a black t-shirt and a dark gray jeans, but sometimes wears a black hoodie with the same jeans. He also wears a dog collar with a name tag.

Drawolf has been active in the furry fandom since 2010, but had known about it long before that. He likes to roleplay, draw, and play video games, mostly on Steam or gaming platforms such as the Playstation 3.