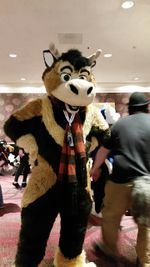 Drake Foxe (also known as Dolinmyster) is a furry and Youtube personality, as well as a Let's Player who resides in Houston Texas. [1][2]

Drake's fursona is a lime-green dragon-fox hybrid with Angel-type wings, which he sometimes refers to as a "Droxel". He is generally dubbed a fox, however, for simplicity.

Drake is also a regular fursuiter. His fursuit is a moose originally owned by Jesper which was passed on to him after Jesper left the fandom.

Drake Foxe has also been an Operations staffer for Texas Furry Fiesta since 2016.[citation needed]