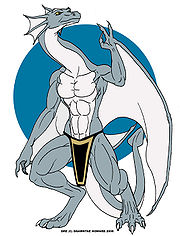 Anthropomorphic dragons, also known as draconids are similar to their full-form cousins, but humanoid or bipedal. Furry fantasy characterizations of this style of dragon may freely combine highly interpretive elements: 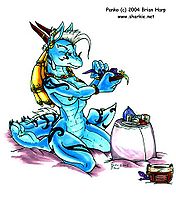 In fiction, myth, and character back stories, non-humanoid and humanoid dragons are sometimes two aspects or variations of the same species. It is not uncommon for non-anthro dragons to possess the ability of shapeshifting in order to assume a humanoid form or presented as examples of parallel evolution.

Dragons have occasionally taken on a more humanistic sensibility in modern fiction. Anne McCaffrey's Dragonriders of Pern saga is thought to be the beginning of the modern reconceptualization of the dragon. Particularly within comic books, anime, manga and furry fandom, the dragon as a character or a personal avatar is often employed to add some draconic qualities onto a more human oriented foundation. Dragon characters commonly take on a more benign, playful, and warm persona.