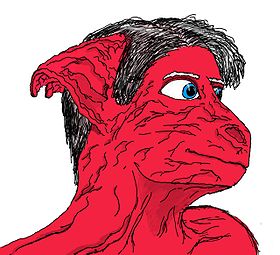 An example of a draconid character

A draconid is a fictional species of anthropomorphic dragon. The term itself is used in various contexts as:

While it is not the rule, draconids are frequently conceptualized as being warm-blooded, which may vary between being mammalian, avian or based on the hypothetical biology of many dinosaur species. To further accentuate their mammal- and bird-like flavor, many draconids are given partial to full coats of fur, or feathers. They also frequently sport details such as external ears, and may or may not have scaly skin. It is somewhat less common for draconids to share female mammalian traits such as mammaries, but this characterization can be seen in certain cases. 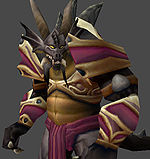 In some fictional settings, draconids are the result of crossbreeding or hybridization between human beings and some form of reptile. In others, they may be an evolved or altered form of dragon, such as the Draconians of the Dragonlance universe.

Within Furry fandom, draconids are a popular variation of the mythological dragon, whether specified by name or by stylization. Anthropomorphized dragons sharing many of the draconid traits appeared as early as 1998, with the publication of furry comic series, Xanadu, by Vicky Wyman.

The game World of Warcraft also features draconids (called drakonids in game) as a sub-group of dragons within the game. They are rare however, and are primarily found within the raid dungeon Blackwing Lair.