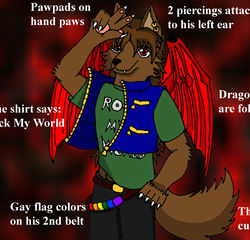 Dracolicoi was born on September 12, 1988. He is a Mexican furry artist and novelist. He also practices graphic design. He's in a sentimental relationtship.

Dracolicoi lives in Yucatan, Mexico, with his mate. He has galleries on Fur Affinity and DeviantArt, though he is more active in the former. He enjoys reading and writing novels, watching movies, reading and designing web comics (Dracolicoi's World is his creation, together with a friend), playing video games and drawing (from serious art to YIFF art). His favourite types of music are metal and rock. He has a strong dislike for sexual violence and harassment towards children. 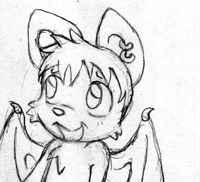 Dracolicoi'sfursona is a young anthro wolf-dragon Hybrid with brown fur, dark chestnut hair and red eyes. He also has two earrings in his left ear. Dracolicoi's body mostly consists of a wolf's anatomy, but has dragon horns, eyes and wings. Early on, his fursona was named Dracolicoi Divine , but he currently goes by the name Draco Nidhoggson. He has the ability of firebreath, fire and electricity bending, transformation, psychokinesis and also has a berserk form that unleashes when he's at his limits. He appears in Dracolicoi's World on ComicFury, where he is the protagonist. Dracolicoi also appears in Life in Midgard, where he is again the protagonist, and Foxy Flavored Cookie, where he is a secondary incidental character.

Dracolicoi tends to be childish and naive several times, as the comics he features in depicts. He mostly is gentle with everyone and does whatever. A Yaoi lover and of homosexual orientation, he's pretty perverted in certain circumstances. He has his limits, though.Out of that, he can get to be really aggressive, using weapons like a chainsaw and a rocket launcher (there is a reference of this in ComicFury)

In Latin, the word draco means dragon, and the term licos is Greek for wolf. Therefore, Dracolicoi literally translates into dragon-wolf.