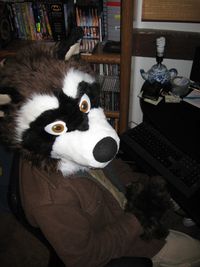 Dr Raccoon (born March 1991;[1] Rico Pinecoon or Rico for short) is a fursuiter who lives in Minnesota, U.S.A. Rico is in a relationship with FlyinFox and has been in this relationship since August 12, 2012.[2]

Rico previously lived in Fargo, North Dakota, for two years before moving back to his hometown of Concord, New Hampshire. Two years later he moved to Minnesota to be with FlyinFox, and to advance his career in broadcasting. He works for a digital signage and broadcast automation software company.

In Ricos real life, he was a senior Staff Producer at a local TV station for three years. He is also an indie game developer as a side hobby. Today,[when?] he works in St Paul, Minnesota, at a software company.

Rico worked staff for Anthro New England 2016 as Livestream Coordinator. However, due to lack of proper bandwidth events were only recorded locally to disk and later uploaded.

Rico also worked as Staff for Furry Migration 2016 as a staff videographer. After FM2016, he took the head position of the Videography Department.