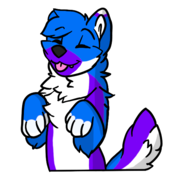 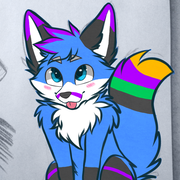 Doughnut discovered the furry fandom in February 2016, at the age of 14, after a recommended YouTube video automatically played whilst Doughnut was playing a game. The video was recommended was Wolflumin, who inspired Doughnut to create his first fursona.

He had always been interested in animals, specifically dogs. After a bit of research on what a "Furry" was, he decided to create his own fursona to use online. He regularly attends MancFurs, a furmeet based in Manchester, England.

Doughnut first fursona was a grey and white wolf called Zherko. This fursona lasted two days before being replaced by Cobalt Wuffy, in which his prop was a doughnut.

His current main fursona is a blue, purple and white anthropomorphic wolf. He also has a secondary fursona, Alkai, who is a multicolored anthropomorphic fox. He isn't shown off as much as Doughnut but is still used from time to time.

Doughnut has a very keen interest in computers and programming. As of recently, he has become an IT technician, to kickstart his career in computers. He also has a very keen interest in lifts/elevators, due to the way they work, the way they are designed, etc... He is also a freelance programmer in both web languages (HTML, CSS, JS, etc...) and client languages (C++, Python, etc...)