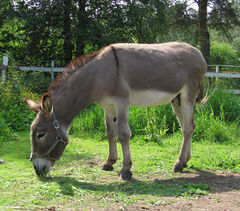 A donkey, or ass, is a domesticated member of the horse family.

Donkeys are adapted to marginal desert lands and have many traits that are unique to the species as a result. Wild donkeys live separated from each other, unlike tight wild and feral horse herds, and in the wild, asses can reach top speeds equalling zebras and even most horses. Donkeys have developed very loud vocalizations, which help keep in contact with other donkeys over the wide spaces of the desert. The best-known call is referred to as a "bray," which can be heard for over three kilometers. Donkeys in the wild can defend themselves with a powerful kick of their hind legs as well as by biting and striking with their front hooves.

A mule is the offspring of a male donkey and a female horse. The much rarer successful mating of a male horse and a female donkey produces a hinny. The offspring of a zebra-donkey cross is called a zonkey, zebroid, zebrass, or zedonk;[2] "zebra mule" is an older term, but still used in some regions today. The foregoing terms generally refer to hybrids produced by breeding a male zebra to a female donkey. Zebra hinny, donkra, zebret and zebrinny all refer to the cross of a female zebra with a male donkey.

Donkeys have a notorious reputation for stubbornness, but this has been attributed to a much stronger sense of "self-preservation" than exhibited by horses.[3] Likely based on a stronger prey instinct and a weaker connection with man, it is considerably more difficult to force or frighten a donkey into doing something it perceives to be dangerous for whatever reason. 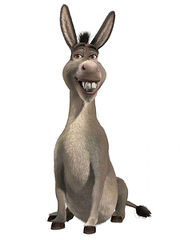